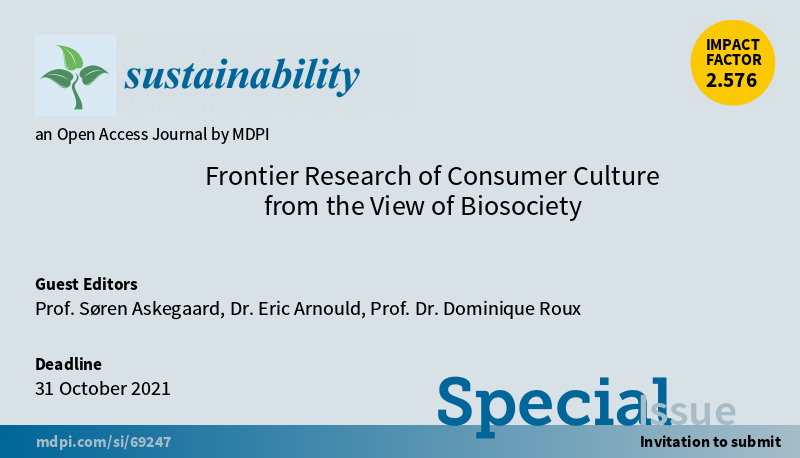 An acknowledgement of the problematic human role in the contemporary anthropocene era rests on the dethroning of humanity as a species outside and beyond the biological. On a more situated level, an understanding of the bio-social anthropos is a precondition for understanding the modes of human desires, seductions and aberrations. The complexity of life and the complexity of the human condition is the starting point for a consumer research agenda and an approach to consumer culture, that can cope with the obvious global challenges to sustainability we are facing.

As noted by Descola in his book The Ecology of Others, foreshadowed by Guattari in The Three Ecologies, and explored by Harraway in When Species Meet, the relationship between humans and the global biome is paradigmatic of the challenges of, and the challenges imposing themselves on humanity in this century. For Descola, a non-exhaustive list of these challenges would include “climate change, the erosion of biodiversity, the multiplication of transgenic organisms, the exhaustion of fossil fuels, the pollution of fragile environments and of large urban centers, the accelerating disappearance of tropical forests and coral reefs, all have become issues of public debate at the global scale and fuel the disquiet of numerous inhabitants.” In this special issue of Sustainability, we invite reflections on the relationship between consumer culture and biosociality in the face of  these and related challenges.

Biosociality as ontology and epistemology addresses the challenges imposed on the vision of sustainable consumption by the current tendency to reduce the cultural, psychic and biological consequences of consumer culture to predominantly if not exclusive a human affair. Furthermore, it reformulates the enduring attitude-behavior gap between consumers’ oft-stated desire for more sustainable consumption and the reality of their behavior in a new way, as a problem related to the systemic misconstrual of the relationship between human economic behavior and the biome. Finally, a biosocial perspective offers an alternative that recognizes the necessity of resource circulation in any imaginable economic system.

This special issue of Sustainability calls for an exploration of a simultaneous acknowledgement of the sociality of the biological and the biologicality of the social without recourse to flawed, universalizing genetic reductionisms. We invite investigations and conversations addressing the possibility of a biosocial renewal of thought in consumer culture theory and ensuing reflections on a more sustainable consumption system against the ecological precarity which consumer capitalism produces. As indicated, biosocial renewal is defined by the contingent extension of the principle of sociality to other living beings, and the recognition that all living beings are in communicative relations with significant others in their environment and between whom resources circulate in value co-creation processes.

We invite submissions without prejudice with regard to paradigm or method.